'Mort is the funniest, most original character you're likely to meet,'
James Patterson #1 best-selling author

Time    flies when you're having fun, even when, like Mortimer Montmorency DeVere, you've lived 9,990 years longer than your average 10-year-old. With the arrival of unwelcome visitors to their ancient family home on spooky Unk Island, Mort and his sister, Agnetha, are plunged headlong into a dangerous race against time, tigers and the terrifying Trish Molyneux.

And, as their strange, secret collection of historical creatures begin to turn against them, the DeVere children discover that today may soon become the weirdest and wildest 24 hours of their very long lives!

All three books in the Mort series are available from all good bookshops (and probably some lousy ones too) or via the Penguin Books website, or through other online sellers. You can get them as e-books from   iTunes and other digital sellers: just click on the shiny new book covers above. And if they're good enough for James Patterson what are you waiting   for?
click on the thumbnails for links to where to buy the books... 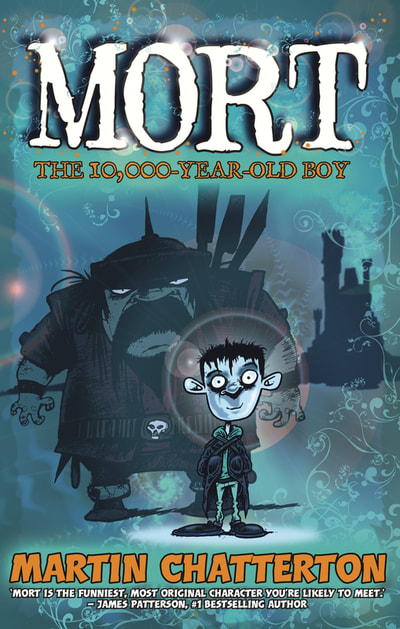 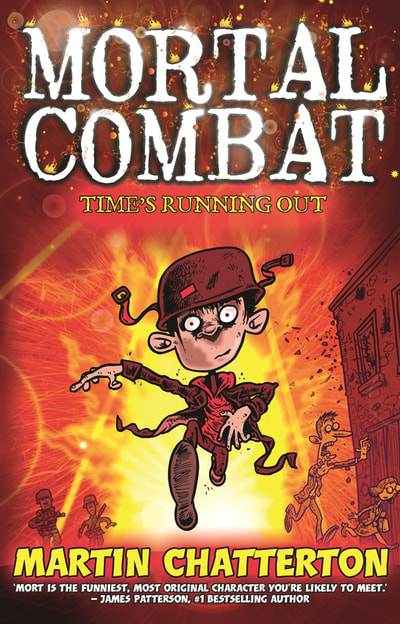 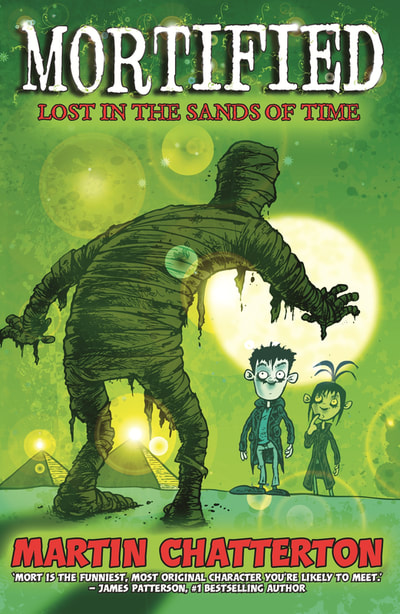 Who's Who?
The Mort books are crammed with weird and wonderful  (and some not so wonderful) real-life people from history.  How many of these can you identify? We're pretty sure you'll get T-Rex without any problem, but  there are a couple of really tricky ones in there too. Good luck! 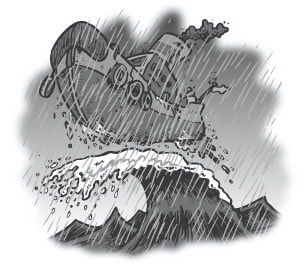 Take a   FREE peek at the opening chapter of 'Mort'!

Chapter One
Unk Island is not a place that gets many visitors. Shaped like a broken coffin, it squats at the very back end of nowhere, and is said by those who have seen it to be the ugliest lump of land to be found in all the seven seas. On days like today, cloud-hung and rain-lashed, it was about as welcoming as a bucket of rotten fish guts.
Yet, vile as the island might appear, six nautical miles away, a ship was wallowing in it’s direction through the slab-like waves of an ink-black sea.
Someone, it seemed, wanted to be there.
At an almost impossible angle, the ancient Unk ferry wheezed painfully up the sheer cliff face of a mountainous wave before teetering on the crest and then plunging like a runaway rollercoaster back down, down, down into the gloomy depths, to start the whole terrifying process all over again. Nigel Spalding, his stomach jostling for space somewhere near his ears, clung to his seat, his fingernails digging into the varnished wood.
He’d already checked the position of the lifeboats, memorised the instructions for using the lifebelts, and sent a tearful ‘goodbye’ to his mother via text message. There was nothing he could do now except hang on and pray. He hadn’t known before this ferry trip that he actually believed in God, but he was in no doubt now. A fresh blast of icy rain smashed against the glass of the ferry lounge window and, as the boat juddered and bucked under Nigel’s clenched buttocks, he squealed for the hundredth time.
It was surely, he calculated, only a matter of seconds before they sank to a cold and watery grave.  His pupils like pinmarks against the white of his eyes, Nigel glanced at his boss to see how she was dealing with this voyage into hell.
‘You know, I had heard this ferry crossing could be quite rough,’ said Ms Patricia Molyneux, glancing up from her laptop. ‘But it looks like we’ve got off lightly, eh Nige?’
Nigel stared at Trish. A slim, neatly-dressed woman of around thirty, she sat comfortably upright, her computer balanced on her knees, a slight frown on her pleasant, if slightly forgettable face.
‘Lost the wi-fi connection though,’ she said, tapping a red nail against the laptop’s steel casing. ‘Damn. I was hoping to finish that “Tracking Truancy” presentation on the way over. Oh well, I’ll just have to do something else.’
​       Trish shut the laptop with a crisp ‘snik’ and placed it back inside its sleek protective case. She took out some paperwork and began making notes in the margins.
She’d gone completely mad, that was it, thought Nigel. The sheer terror of the ferry crossing had pushed her over the edge. It was the only explanation. Nigel forced his face back to the window and was confronted with a vast wall of water rearing up above the ferry as if it was an angry sea monster.
‘Mummy,’ whimpered Nigel, and puked his morning muesli all over his knees. 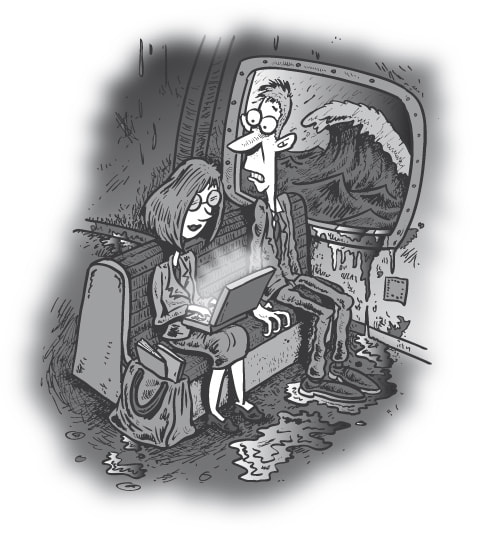